“I was serving guests lobsters every day and understanding the detrimental effects of mass-caught seafood on the environment. I then realized that my work didn’t align with my beliefs,” says Gabrielle Reisner, VG22, (she/her) an experienced veteran in the food services industry who went vegan six years ago. “Veganism piqued my interest in U.S. farming practices and food systems.”

Reisner spent much of her time interacting with, caring for, and learning about animals while growing up in Memphis. “When I look at pictures of me when I was a kid, in each one I’m holding an animal,” she shares. “I was interested in spiders, I had all types of lizards, dogs, bunnies, and cats.” But it wouldn’t be until later in life that she realized her true passion.

After earning a B.S. in Education from University of Memphis in 2010, she spent years teaching across various subjects and grade levels. She put herself through school by working at a local fine-dining restaurant, and spent over 10 years in industry. “I’ve always worked in the food sector in several capacities—serving, bartending, and managing—even when I was teaching.”

In 2016, Gabrielle moved to Rhode Island to be closer to family, and quickly found a job at a well-known fine-dining seafood restaurant. But, she knew in her heart that it wasn’t what she was ultimately meant to do.

Reisner attended a New England VegFest event in Worcester, where vegetarianism is promoted and celebrated. There, she met a representative from Cummings School of Veterinary Medicine at an information table. “ I saw the MS in Animals and Public Policy and was thrilled to learn a program like that existed. It immediately showed me a career path I previously never thought was possible.”

She started to attend Animal Matters Seminars, a series of lunchtime talks presented by distinguished scientists, animal professionals, ethicists, and advocates, hosted by Cummings School’s Center for Animals and Public Policy and sponsored by the Elizabeth A. Lawrence Endowed Fund.

And when the pandemic hit, Reisner knew it was time to make a change. “It opened the door for me to make a transition. The MS in Animals and Public Policy program enabled me to focus my studies on my interests—farmed animals and factory farming issues, and the public policy side of it.”

To conclude her MAPP requirements, Reisner landed a summer externship with Farm Forward, which touts the mission “building the will to end factory farming.”

She explains, “It was amazing working for Farm Forward, but at the completion of my externship they did not have a full-time position available. They were incredibly supportive while I continued work as a campaigns extern part-time while I searched for a full-time opportunity.”

“Dr. [Allen] Rutberg, [director of the Center for Animals and Public Policy] served as a mentor throughout my time in the program, and I’m so grateful for all the support I received from everyone at Cummings School, which helped me to transition from my externship directly into a full-time position.”

Reisner contends that what she learned in the MAPP program helps her excel in her role as a U.S. Food Business Manager for Compassion in World Farming. “I work with leading U.S. food companies and assist them in making policies which improve animal welfare throughout their supply chain, rebalance their protein portfolios, and meet their sustainability goals.” she says.

Compassion in World Farming was founded in England in 1967 by a farmer who was concerned with the increasing industrialization of farming. Now, the global NGO has offices in eight countries and representatives in five additional countries.

“Annually we publish EggTrack and ChickenTrack, which are reports that capture which restaurants, grocers, producers and other leading food business are making progress toward getting laying hens out of cages and improving broiler chicken welfare,” says Reisner. “Having spent many years in the restaurant industry myself, that experience combined with my degree in animals and public policy made me a perfect fit for the role.”

“I really enjoy networking, the social aspects of my role, and opportunities to travel and meet people in person. I thoroughly enjoyed recently attending the Agriculture Sustainability Conference which was held in Arizona.”

Reisner is eager to grow in her career. “Working in this space is a dream come true for me,” she beams. “I’m looking forward to continuing to move the needle toward improved farming practices and better food systems.”

Master’s degrees with a difference

Fuel your passion for healing animals, helping humans, and changing lives with a master's degree from Cummings School of Veterinary Medicine. Informational webinars for all programs are available. 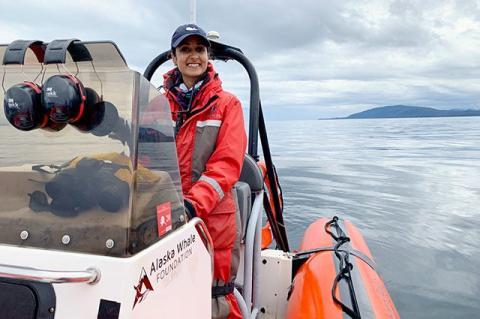