Helping Those Who Need It Most

Petty Kim, V20, explains how her upbringing led her to veterinary medicine

Petty Kim’s brother knew she would be a veterinarian long before she did. When Kim was 16, her family visited Korea for the summer. They came across a shop that had a puppy in rough shape—it was losing its hair and being fed milk by the shopkeepers.

“I was very, very upset. I was begging my parents to let me take it home,” Kim recalls. “I made the shop owners promise me that they would take better care of it—and from my brother’s perspective, seeing me like that, was when he thought that I would go into the veterinary field.”

It wasn’t until many years later that Kim truly made the decision to become a veterinarian. But she has always been a caregiver. As the oldest child of first-generation immigrants, Kim helped raise her younger brother. She spent a lot of time translating between languages and cultures —all while trying to figure out exactly who she was, where she was, and how to move forward.

Kim credits this upbringing with her sense of empathy, which easily transferred over into her work with animals when she later entered veterinary school. “I’ve always wanted to help those that needed the help the most,” she says.

But although she found strength in helping others, Kim secretly suffered from depression. “I always had the sense that maybe I was kind of different from other kids, like a part of me was missing,” she says. “It’s a daily battle trying to convince myself and to find the joy in everyday life and trying to keep going from there.”

Feeling torn between her passion for animals, wanting to help those most in need, and feeling cultural pressure about career choices, Kim enrolled at the University of Vermont for undergraduate school as an undecided major. “But the summer before starting college, my parents said that they would support me in whatever I wanted to do,” explains Kim.

So, two weeks before classes began, Kim sent the university an email saying she’d like to enroll in the animal science program.

At UVM, she dove into a number of opportunities. Kim was part of the CREAM (Cooperative for Real Education in Agricultural Management) program, which has a student-run dairy barn on campus. She continued to volunteer with the local humane society. And she got an internship with the Swiss Village Farm (SVF) Foundation in Newport, Rhode Island, which helps collect and preserve genetic material to save heritage and rare livestock breeds.

When she got to UVM, Kim also sought support from a psychiatrist. Faced with the reality that depression could keep her from going to veterinary school, Kim persevered—her fear of missing out on her calling overpowering her daily battles with her mind.

Kim chose to apply only to Cummings School of Veterinary Medicine. Upon arrival on the Grafton campus, she discovered an immense support network.

“I felt comfortable talking with my peers, and I wanted to do my part in removing the stigma behind not being able to freely talk about mental health. And they were very supportive,” she says. “Sometimes we overlook the things that we should value more in ourselves, and just constantly hearing that you’re doing a good job from other people is helpful.”

Kim also discovered a love of guinea pigs when she began veterinary school. “Once I saw one in real life, it just pulled at my heart strings, and I had to have one,” she says with a laugh. “The things that you find out about yourself by constantly putting yourself in new and unusual situations is always a lot of fun, and it can bring a lot of joy.”

Even through the rigor of veterinary school, Kim has continued helping others. “I really enjoy mentorship and talking with underclassmen because, even though there are a lot of things you learn in the classroom, there are also a lot of things that you have to learn from experience,” she says. 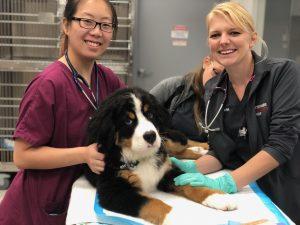 Kim volunteered at the MSPCA Nevins Farm in high school, and this passion for community medicine continued throughout her time at Cummings School. Kim volunteered at Tufts at Tech—a community veterinary clinic at Worcester Technical High School—and for the feral cat clinics at the Luke and Lily Lerner Spay/Neuter Clinic. She also served as the student coordinator for the school’s community-outreach program with the Worcester Housing Authority.

But, it was in her second year when she began working as a student technician in the emergency room that Kim realized that was the type of environment she could see herself in for the long-term.

“I feel like my personality traits and my ability to communicate and empathize is really a benefit in helping owners make the best decision in an emergency,” she says. “My hope as a veterinarian is that I will be able to provide comfort and a sense of companionship and unity between owners when they have to make difficult decisions.”

Kim was inducted into the Tisch College of Civic Life’ Honos Civicus Society in recognition of her important contributions during her time at Tufts. After commencement, she will begin at Ocean State Veterinary Specialists as a small-animal rotating intern.

“I’m just really excited to start making my own contributions to the community and to get out there and start making a change as best as I can,” she says.

Kim has learned a great deal about veterinary care and self-care since that seemingly fateful summer in Korea when she advocated for an unwell puppy. “You can’t live your life for others,” she says. “The best way to find your own strength is to find what means the most to you.”