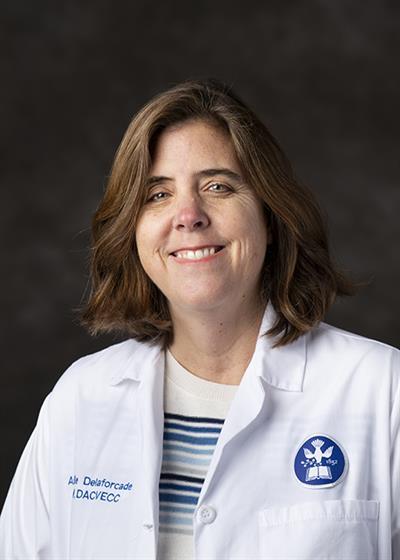 Associate Professor, Department of Clinical Sciences
(508) 839-5395
armelle.delaforcade@tufts.edu
Research/Areas of Interest: hematologic changes in veterinary trauma and in critical illness; development of protocols for anticoagulant use in the veterinary setting; monitoring anticoagulation therapy; severe trauma in dogs and cats.

Dr. Armelle de Laforcade serves on the Emergency and Critical Care team at one of the nation's busiest teaching animal ERs, in the Foster Hospital for Small Animals. As a criticalist certified by the American College of Veterinary Emergency and Critical Care, she cares for the very sick and injured animals that require 24-hour care and advanced monitoring. In addition to her clinical duties, she teaches courses on subjects ranging from sepsis to coagulation, as well as the business of veterinary medicine.

A first-generation American, Dr. de Laforcade grew up on the north shore of Boston, with the exception of a few years spent in the south of France. She began riding horses while living in France and after returning to the United States cared for a horse of her own. Her love of horses led her to study veterinary medicine at Tufts. Although determined to practice equine medicine, she spent time in the small animal emergency room as a second-year student and felt right at home. After earning her DVM from the Cummings School in 1997, she completed a residency in the ECC section, then stayed on as a faculty member, drawn by the opportunity to combine cutting-edge medicine with teaching students, interns and residents. To this day, I am very grateful to those teachers along the way who gave me opportunities that helped me find my way, she says. I hope to have the same effect on students discovering veterinary medicine at Tufts.

Among her favorite patients is a dog named Norton who ate a tennis ball that was surgically removed by a referring veterinarian. Following the surgery, however, Norton's health began to decline and he was rushed to the Foster Hospital for intensive care. While being treated with intravenous fluids, Dr. de Laforcade and her care team determined that Norton had an underlying endocrine problem known as hypoadrenocorticism. Once treated, Norton recovered just fine and, with lifelong treatment, he lived a long life.

She lives with her husband, Lee, and her twin boys, Nicholas and Tristan, as well as a Golden Retriever named Mayday. She grew up sailing, and she and Lee spent years racing their J24 in regattas from Annapolis to Maine, as well as traveling to Europe to visit her family.
Read More Career Highlights / Publications Research Professional Activities Courses / Teaching Activities