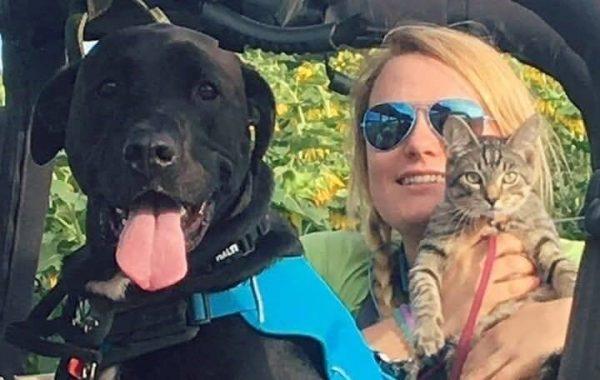 What were you doing before entering the Masters in Animals and Public Policy (MAPP) program?
I pursued an extra year of undergrad in order to complete Bachelors in Biology and Psychology. I spent time working at my local animal shelter, interning for my local vet office, and interning for a therapeutic riding center. I applied and was accepted into the Vet Program at University College Dublin in Ireland. After further consideration about my specific areas of interest and deciding to care for an ailing grandparent, I turned down my acceptance. In my gap years, I became a community volunteer, took care of an ailing relative, and took a road trip across the country out west.

What aspects of MAPP led to your decision to join the program?
The MAPP program offers the ability to connect and further understand the Human-Animal Bond. Understanding Human-Animal Interactions has been a growing interest of mine as I enjoy identifying and understanding the key characteristics that connect people to a broad range of animals.

Interests in and experience with animals
I grew up having pets from the age of 5 ranging from injured wildlife to domestic cats and dogs. I volunteered at a local vet office when I was in high school and interned with my local vet during my junior year of college. I spent two summers working at the local animal shelter specifically working with the isolation cats and dogs to prepare them for adoption. I also spent the summer of my 4th year of college interning at a therapeutic riding center where I worked with individuals ranging from Veterans to the elderly and children. During my time there, I was able to design programs to help individuals as well as learn and study the behavior patterns and responses of the horses in relation to the people and vice versa.

What do you want to focus on at MAPP? What drew you to this area?
I’m very interested in research as I eventually would like to pursue a PhD in comparative behavioral psychology. I would also like to focus on Animals in Society as I believe there are multiple groups of individuals whom would benefit from animal interactions and therapies.

What are your career goals?
I would like to research different species (specifically canines, equines and rats) and their effect/benefit on individuals with mental and physical limitations. I would eventually like to pursue a PhD in psychology as well as design new programs that would provide various forms of animal therapy to individuals who have not had access before.

What are your outside interests?
During the winter I am usually found on the slopes snowboarding. During warmer months I love to hike with my dog and cat, mountain bike, kayak, camp, SUP, write, and explore the world and cultures around me. I can be found having a million adventures or spending some relaxing time on the couch.

Number of pets? What type?
I currently have one dog (Boxer/Lab mix), three cats and a bunch of fish. Over the last few years I have had rabbits as well as two rats I adopted from an undergraduate research project.

Is there anything else you would like to share?
I grew up in southern Pennsylvania but spent most of my free time in upstate New York and New England where my mom’s family is from. I am very excited to start this new adventure in an area I have always loved!

Canine stress-related behaviors are often exhibited when canines are in new environments and/or experience owner separation. The past study (2019) was a within-subjects experimental design. Phase one consisted of the dog, owner, and experimenter in the testing room together while phase two consisted of the dog alone in the testing room. Twenty-three dogs were recorded using two video cameras. In 2020, an ethogram was used to code canine stress-related behaviors. The data from thirteen videos thus far have been analyzed for the most commonly occurring behaviors observed in each phase with walking, sniffing, and owner interactions being the most frequently observed behaviors for phase one. Gazing at the front room door/window, whining, and standing were the most frequently observed behaviors for phase two. The final project will consist of coding and analyzing canine behaviors across two additional phases further exploring canine behavior during owner separation and owner reunion. The results of this study may help to better understand canine stress behaviors as well as the various effects testing environments and conditions may have on canine behavior-responses.