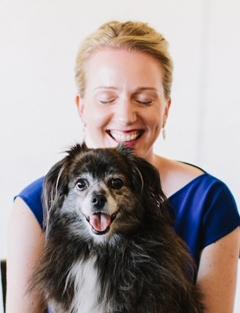 What were you doing before entering the Masters in Animals and Public Policy (MAPP) program?
Before I started the MAPP program, I was completing an undergraduate degree at Dalhousie University in Halifax, Nova Scotia. My focus was International Development Studies and environmentalism, and I was very interested in the relatively new field of “religion and ecology”. My degree was highly interdisciplinary, and it gave me a great foundation for studying animal welfare and environmentalism through many different lenses.

What aspects of MAPP led to your decision to join the program?
One summer during my undergraduate degree, I interned at the Farm Sanctuary in Watkins Glen, New York. My interest in animal rights/welfare was long-standing, and I wanted to learn more about how to start an animal sanctuary. At the Farm Sanctuary one of my fellow interns mentioned the MAPP program—I had never heard of it before. After looking into it I knew it was the perfect program for me. I knew I wanted to continue my education after completing my B.A., but I wasn’t sure which direction to go in. Being able to complete a graduate degree with a focus on animals was a dream come true for me!

Interests in and experience with animals.
My interest in animals has been obvious to everyone around me since I was a child. I became a vegetarian when I was 13 years old, and it was just before then that I became interested in animal rights. Over the years I have volunteered at many animal shelters and spent my summers working with animals as well. The two highlights there were my summer at the Vince Shute Wildlife Sanctuary in Minnesota (2001) working with wild black bears, and then the Farm Sanctuary after that in 2002.

What do you want to focus on at MAPP? What drew you to this area?
I had been interested in the area of “religion and animals” at Dalhousie University, and a course I took there called “Religion and Ecology” very much inspired me. I was interested in learning more about how different worldviews and ethical systems predispose us to treat animals and the environment in particular ways.  I met Dr. Paul Waldau (former faculty at MAPP) the year before I applied to Tufts, and he encouraged me to pursue the burgeoning field of religion and animals. He is one of the pioneers in that field and working with him was a true joy.

While at Tufts, Dr. Waldau encouraged me to continue my work in religion and animals, and it is because of him that I applied to doctoral programs in the field. That led me to Northwestern University to pursue a Ph.D. in Religion, Ethics, and Public Life, with a focus on animal ethics.

What are your career goals?
When I was at Tufts I learned about “the link” among four types of family violence: child abuse, animal abuse, elder abuse, and domestic violence. It stuck with me over the years, and while completing my doctoral degree in Chicago, I interned at the Chicago Metropolitan Battered Women’s Network. I had hoped to start a pet-safekeeping program for survivors of family violence when I returned to Canada, and in 2017 I was lucky enough to do that. Along with two friends, I started Link Coalition Toronto, which is now SafePet Ontario. We have a province-wide pet-safekeeping program, and we also educate about “the link” among these types of family violence.

So in some respects, I have achieved two major career goals I set out for myself: completing a doctoral degree, and starting a SafePet program. My current goal is to develop SafePet Ontario throughout the province and to assist other groups in doing something similar throughout Canada. I would also like to further explore the human-animal bond as experienced by the elderly.

What are your outside interests?
My primary outside interests are nature, hiking/canoe tripping, swimming, reading, Buddhism and meditation, music, gardening, anything to do with the 60s, and opera.

Number of pets? What type?
I had a dog for 14 years named Frida who was the love of my life, but she passed away in 2019. Right now I have to very large cats who I got through our SafePet Program. I was fostering them and after returning them to their owner (once she had found safe housing for her and her children), she realized she was not able to give them the life they deserved. So we took them back and… the rest is history!