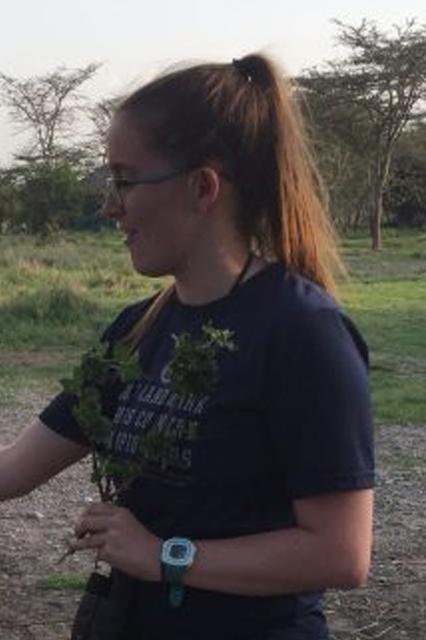 What were you doing before entering the M.S. in Animals and Public Policy (MAPP) program?
Before entering the Masters in Animals and Public Policy program, I was a transfer student-athlete at Canisius College in Buffalo, N.Y. I had many experiences with animals in the wild and within captivity during these years. While at Canisius, I went to Kenya with some other students where we went to many conservancies, had numerous discussions with conservation officers, and learned about their culture. I also interned during the summer and volunteered during the Fall with the Buffalo Zoo’s hoofstock team. I had the opportunity to work alongside the keepers mainly with American bisons, addax, gemsbok, bighorn sheep, reindeer, common zebras, and a roan antelope (and sometimes with the giraffe and Sumatran rhinos as well). I also was able to do behavioral research on the gorillas at the zoo during my time at Canisius.

What aspects of MAPP led to your decision to join the program?
For me personally, there were a lot of reasons I chose to join this program. First, I have always loved conducting research. Every other program I was interested in only had a taught path not a research path option which made this program stand out to me. Also, a lot of the focus of these classes I’ve noticed were on animal welfare and policy/law which is exactly what I want to learn more about. For my learning style, this was also best because it was in person and the classes would be small. I also loved how the learning atmosphere is in a rural environment and you can see animals all over campus. Another plus about the program is it is a few hours from home for me so I can see my dog more than I could during my undergraduate years when I was eight to ten hours away.

Interests in and experience with animals prior to joining the MAPP program?
Ever since I can remember I have always loved animals and wanted to have some sort of career with them. I grew up in a rural environment where I could observe animals in the wild all the time. I also visited many zoos, aquariums, and petting zoos which helped me learn about animals around the world. Other than owning dogs throughout my life, I didn’t have much experience with animals until I got into high school. Since that point, I have been conducting field and lab behavioral research on different organisms which include cedar waxwings, a common octopus, and gorillas as well as working with animals and keepers while interning at the Buffalo Zoo. From my own experiences and classes, I learned not only about behaviors but about conservation, welfare, laws, and nutrition of animals as well.

What are your outside interests?
I love to go on runs. I have been running cross country and track for about ten years now! I also used to be a competitive swimmer, so swimming is something I like to do as well. I also like hiking, walking on trails, hanging out with my dog, and doing wildlife photography.

Number of pets? What?
I have a rambunctious dog named Maple (13 years old) who is a Beauceron/ Siberian husky/German shepherd mix (and many more breeds but the list is too long).

One of the most common threats to wildlife is poaching. Poaching, an issue of illegal take brings in millions as these animals and plants are viewed as resources that can be traded. Many help to prevent the issue but there is a lack of knowledge of the cultural trends and sociological research on the issue. Through my research, I plan to get the voices of those who protect wildlife from poaching out. For my study, a total of 30 individuals from the anti-poaching field will be interviewed to represent the United States and Kenya. These individuals have held positions in the zoo field, conservation field, federal level, state level, as a hunter, or are dual citizen. The purpose of this qualitative study is to use in-depth interviews to develop an understanding of changes in poaching culture since the 1970s in both Kenya and the United States.