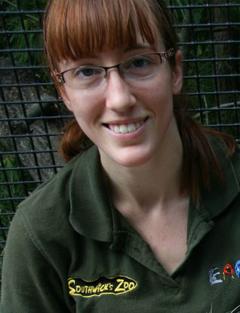 What were you doing before entering the M.S. in Animals and Public Policy (MAPP) program?
After graduation in 2017, I spent two years interning and working at various animal care institutions including Zoo New England and the New England Aquarium. I have spent the last year volunteering with the Sea Turtle Rescue program at the New England Aquarium and with Foster Parrots, an animal sanctuary in Rhode Island that cares for exotic birds rescued from neglectful homes or surrendered by their owners.

What aspects of MAPP led to your decision to join the program?
My decision to join the program was influenced by its hands-on approach to learning different perspectives of animal welfare and policy through a diverse array of courses. Since most of my experience has involved animal care and behavior in zoos and aquariums, I want to learn about other aspects of human-animal relations and how to effectively advocate for animal welfare. The applied track’s specific coursework and externship, driven by real-world experience, will develop my understanding of animal issues and policy. With this knowledge, I hope to be able to produce change that will benefit animal conservation.

Interests and experiences with animals
My main interest is animal behavior and cognition and that interest has blossomed into a passion for animal welfare and conservation. I only realized my interest in animals during high school. While I appreciate domestic and companion animals, my love has always been exotics, starting with my project on grey wolves in 9th grade. What started as a fascination with predator behavior and pack dynamics, turned into an understanding of human impact on wildlife and a desire to improve the lives of animals as they exist alongside humans. My experience is mostly centered around zoos and aquariums, although I have had some experience with research and rescue work. My first experience working with animals was during a gap year program in Costa Rica where I volunteered with a sea turtle rescue group. We walked the beaches to find leatherback sea turtle nests and collect their eggs to protect them from poachers. This was the beginning of my interest in animal conservation. College experiences included an animal husbandry and education internship at Southwick’s Zoo, an animal care internship with Stone Zoo, and a temporary zookeeper position at Franklin Park Zoo. I have also interned and volunteered with the New England Aquarium’s offsite animal husbandry, penguin colony, and sea turtle rescue programs. These experiences allowed me to work with a large variety of large and small mammals, reptiles, birds, fish, and invertebrates. I also collaborated with one of my professors on welfare training protocols for various animals at Southwick’s Zoo, gathered survey data on rhino conservation from zoo visitors, and investigated visitor experience and animal welfare in a new exhibit space.

What are your outside interests?
At home I enjoy baking, reading (horror, sci fi, fantasy, and animal non-fiction), video games, tabletop roleplaying games, board games and jigsaw puzzles. Outside, I like to hike, kayak, sail, and ski. Other favorite activities include dancing, birding, and wildlife/nature photography.