Headed for the ’Frisco Bay 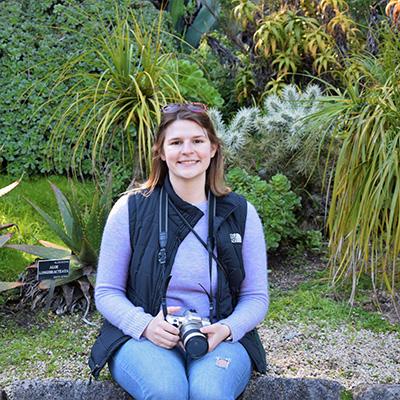 Eden Hurlburt, V22, has fostered her interest in both companion animals and marine mammals in her work and studies. Originally from Stouffville, Canada, she decided to become a veterinarian during her undergraduate years at the University of British Columbia.

While earning a bachelor’s degree in animal biology, she volunteered and was later hired as a technician assistant at the Vancouver Animal Emergency & Referral Centre.

“I had shadowed at general practice clinics, but this was my first emergency center. Every day there was something new,” she shares.

For her honors thesis, Eden culled through 50 years of data about marine mammal populations and fisheries in the Eastern Bering Sea. She found a sufficient, yet changing supply of prey, bringing variable nutritional value to the mammals. As a result, species such as Steller sea lions declined, though they have recently rebounded.

After graduating in 2017, Eden worked as a client care representative and technician assistant at 404 Veterinary Emergency and Referral Hospital in Ontario. Her role ranged from scrubbing in for surgeries to working directly with clients. She spent a year at the hospital before heading to vet school.

“Chatting with professors during the interviews, I got the vibe that Tufts was interested in me as an individual, and I found that to be true as a student,” she acknowledges.

As a member of VERC, Eden represented the class if an issue arose, such as confusion about a lesson or concern regarding the curriculum, and alternately, as a way for professors to disseminate information to students. During the pandemic and the shift to virtual learning, she was especially busy communicating between students and faculty.

When the members of her class felt overwhelmed in their rotations this year, Eden asked her classmates to keep track of their clinical hours. “I took that data and presented it to the curriculum committee and rotation heads,” she explains. “It showed how dedicated professors really are—they were very receptive. It confirms that you can have a voice as an individual at Cummings School.”

For ASLAP, Eden helped organize student events such as lunch talks and journal club. As treasurer for the class council, she used available funds to purchase and distribute pocket-sized small animal medicine guidebooks for students before they started clinics. She’s currently working on personalized doctor jackets for her classmates.

One of her favorite courses at Cummings School was Equine-Assisted Learning, where she gained an unexpected skillset. “The course focused on building confidence and core communication skills while working with horses,” Eden says. “I felt like I had a cheat sheet for effective communication. It’s something I use every day, even with friends and family. It’s a nice tool for talking to clients.”

To broaden her experience, Eden spent a summer between classes as an animal rescue fellow at Mystic Aquarium, helping care for orphaned and abandoned harbor seal pups and gray seals.

“It was very rewarding when we finally got to release the pups who were rehabilitated,” she fondly recalls.

Eden is looking forward to treating animals in San Francisco after she graduates in May—and continuing to pursue her interest in both companion animals and marine mammals. She accepted a position at a general veterinary practice in the city and also hopes to volunteer at the Marine Mammal Center in nearby Sausalito.