Training for the Trainers

Cummings School of Veterinary Medicine at Tufts University hosted a “Training for the Trainers” session for “Nero’s Law” in December, where veterinarians were provided with instructions and materials to train Massachusetts Emergency Medical Services staff how to provide first-aid and humane transportation to K-9 partners in need.

Signed by former Massachusetts Gov. Charlie Baker, Nero’s Law enables Massachusetts Police K-9s to receive emergency care from EMS staff and transportation to a facility for specialized veterinary care. “Nero and all K-9 Officers like him deserve the same quality of care that we are able to deliver to all law enforcement personnel,” said Gov. Baker in April 2022 at a Yarmouth Police Department ceremonial bill signing.

“We aim to provide the best materials and practices necessary for training, while adhering to a national standard for training and care,” said Majoy, a Lt. Col. in the U.S. Army Veterinary Corps (Reserve).

Supported by SMART, the Massachusetts Veterinary Medical Association, and Massachusetts Vest-A-Dog, veterinarians and veterinary technicians across the Commonwealth of Massachusetts will learn the proper training techniques outlined by Nero’s Law, and train EMS personnel in a basic life support course to treat injured police K-9s.

“We were happy to be able to host this training program and be part of preparing Massachusetts EMS staff to provide basic lifesaving care and transport for working dogs,” said Cummings School Dean Alastair Cribb.

Two K-9s have received emergency care and transportation thanks to Nero’s Law. Most recently, Massachusetts State Police Trooper Ken Hanchett and K-9 partner Orry were injured while working a construction detail on Interstate 495. Both were hospitalized and Orry was transported to Cummings School of Veterinary Medicine’s Henry and Lois Foster Hospital for Small Animals, where he was treated and released. Trooper Hanchett was also treated and released from a local hospital. 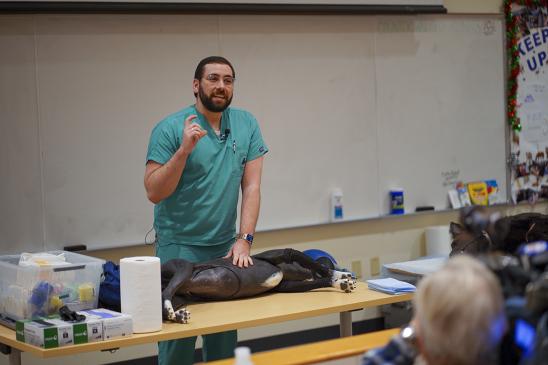 Andrew Beaulieu, of the Easthampton Police Department was one of five K-9 officers who brought their K-9 partners to the event. “We’re here to learn about the EMS protocols and to allow some of the attendees to get some experience interacting with our working K-9s,” said Beaulieu.

State Representatives David Muradian (R-Grafton) and Steven Xiarhos attended the event. “The law is in place and it is wonderful to see it in action,” said Xiarhos in a Facebook live post.

Up to 20,000 EMS personnel across the state are being trained to provide these additional services to Massachusetts Police K-9s injured in the line of duty.