What to do if you found a snapping turtle 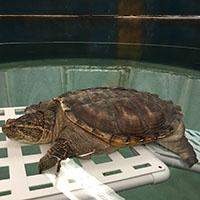 Snapping turtles vary considerably in size depending on their age. These turtles can live for decades and become quite large (up to 30 lbs.). While snapping turtles are often thought of as aggressive predators, these turtles, in fact, are omnivores whose diet consists partly of plant matter. Snapping turtles spend most of their time underwater waiting for their next snack to float by. They are not aggressive animals, but like any wild animal, they will defend themselves if they feel threatened. 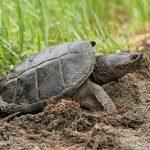 Snapping turtles are easily recognized by their dark carapace (upper shell) with a deeply serrated back margin and a small plastron (bottom shell) that does not completely cover all of the animal’s flesh. Three low keels (or ridges) on the carapace of younger turtles often become obscure as the turtle matures. The carapace measures 8-12 inches on an average adult, and the turtles can weigh between 10-35 pounds. The carapace can vary in color, from green to brown to black; sometimes it is covered with moss. Snapping turtles have a long tail, often measuring as long or longer than the carapace, that is covered with bony plates. They also have a large head, long neck, and a sharp, hooked upper jaw. This hard beak has a rough cutting edge that is used for tearing food.

Snapping turtles are most often encountered during mating and breeding season when they come out of the water and can travel a considerable distance over land. Females may be seen laying eggs in your yard.

If the snapping turtle is injured and you cannot transport it to Tufts Wildlife Clinic immediately or if the Clinic is not open, keep the turtle in a warm, quiet place in the tightly sealed container with proper breathing holes until you are able to bring it to the Clinic.

For further assistance on Transport, please refer to the "Who to Call for Help" section on this page.

Raising a wild animal in captivity is illegal unless you have a proper state or federal permit.