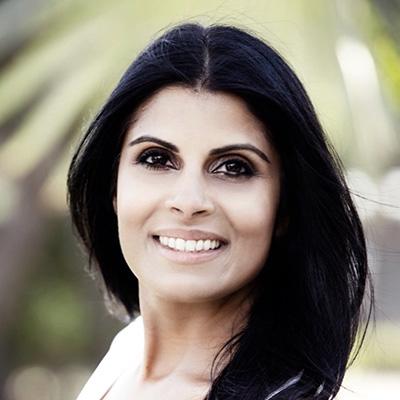 Nirva Patel, VG21, advocates for animal welfare backed by the credentials in science, engineering, law, and public policy to make a difference.

Growing up in Ashland, Massachusetts, Patel planned to become a veterinarian. As an undergrad at Boston University, she found herself drawn in a new direction and majored in biomedical engineering.

After graduating in 2000, she became a licensing associate at Wyeth Pharmaceutical in Cambridge. While working full-time at Wyeth, she pursued a JD in biotech/patent law at the New England School of Law, where she was awarded a Trustee Scholarship. Patel was hired as a patent attorney at Nixon Peabody in Boston in 2004. The following year, she and her husband moved to Mumbai, India, where he started a hedge fund.

During their eight years in India, Patel worked in nonprofit law, volunteered at an orphanage, and became more involved in the Jain religious community, which espouses nonviolence to all living creatures. A lecture by a Jain priest about the dairy industry and the suffering of animals struck a chord and further inspired her dedication to animal welfare.

After moving back to Massachusetts, Patel (along with James Cameron and Arnold Schwarzenegger, among others) served as an executive producer of the 2019 documentary, The Game Changers, which elucidates the health benefits of a plant-based diet and became one of the most watched documentaries on iTunes and Netflix.

“After I saw the first cut of the film, I wanted to support it, so I joined as an executive producer and continued to spread the messages in the film,” Patel admits. She hosted a panel at Harvard Law School featuring producers and athletes from the documentary, including Serena Williams and Novak Djokovic.

Once the pandemic started, Patel positioned herself to do more. “The pandemic opened our eyes to all these systems in place where animals take the toll,” she laments.

She applied to the Master of Science in Animals and Public Policy (MAPP) program at Cummings School of Veterinary Medicine at Tufts University.

“The program gives an aerial view of all the issues facing animals,” she explains. “It’s perfect for anyone who wants to work in animal protection—whether it’s advocacy, education, rescue, or policy.”

One of her favorite courses was Public Policy Analysis. The students researched an existing debate on local, state or federal policy, taking into account stakeholders, resources, and political motivations. She also found the Communicating Policy Positions course particularly enlightening.

“We had to pick an issue we’re passionate about and argue for and against ourselves,” Patel shares. “I had to pretend that I was chairman of the National Pork Producers Council. It was difficult, but important to go through those exercises to avoid being in an echo chamber where everyone agrees with you. You need to get into the shoes of the people you’re trying to impact.”

For her externship, Patel interned at the Brooks McCormick Jr. Animal Law & Policy Program at Harvard Law School. She worked on a case involving the National Park Service’s management of the elk population in Point Reyes National Seashore. She put skills gained in the MAPP program to work conducting scientific research on ecosystems and genetic diversity.

Patel was hired as a global policy fellow with the program and is currently developing a report on regulatory and legal issues involving wet markets in India and their potential for zoonotic disease spread. She also chairs the board of directors at Farm Sanctuary, a nonprofit serving more than 900 rescued farm animals.

Patel and her husband have four young children. Her kids recently helped her push for a ban on fur in their hometown of Weston.

They won the petition.

(Students in master of science programs at Cummings School of Veterinary Medicine follow an academic calendar that runs 12 months each year beginning in August.)