The job of the lungs is to deliver oxygen to the body and to take the carbon dioxide, which is a product of normal metabolism, away from the body – this is termed lung function. Lung function testing does exactly what the term says – it evaluates how well the lung functions in delivering air to and from the lungs. In overt heaves, it is easy to demonstrate abnormal lung function with standard methods. In IAD, abnormalities in lung function are often so subtle that it is necessary to challenge the airways to detect any abnormalities. Although many people diagnose IAD with bronchoalveolar lavage cytology alone, lung function testing is the only way to know how affected the horse’s lungs are currently and how effective treatment has been in improving your horse’s ability to get air in and out of the lungs.

Analysis of lung function usually requires us to measure the flow and pressure in the lung. The classic way of doing this is with a pneumotach, a device for measuring flow as it comes out the nose, and an esophageal balloon. This technique isn’t very well suited to clinical work, which is why most owners or trainers have never heard of it.

At Tufts Equine Respiratory Health Lab, we have two different methods of non-invasive lung function testing: Forced Oscillatory Mechanics, or FOM, and Open Plethysmography, which is referred to as Open Pleth created by Dr. Andy Hoffman. Both techniques allow us to effectively measure lung function in the athletic horse. FOM is the technique most commonly used in the hospital, where we push pulses of compressed room air into the horse’s lungs and then look to see what happens to that air as it comes back to our sensors – a pneumotach (airflow measuring device) and pressure transducers. If the horse’s airways are constricted or full of mucus, the pulses of air that bounce back to us are smaller and out of synch with the pulses that went in. We use this information to get a measurement of respiratory resistance, known as RRS, which in turn gives us a number that we can use to say whether the horse’s respiratory system has difficulty moving air. Open Pleth also gives us an idea of what the respiratory system resistance is, but it does it in a slightly different way. With Open Pleth, we still measure airflow at the nose with a pneumotach, but we also record a theoretical airflow at the chest. To do this, we place elastic bands that are capable of transmitting a signal around the horse’s chest and abdomen, and we translate the expansion and contraction of those bands as the horse breathes in and out, first into volume changes and then into flow. We then compare the true flow at the nose with the calculated flow from the bands – the delta flow, or the difference between the two, is a surrogate for respiratory resistance. 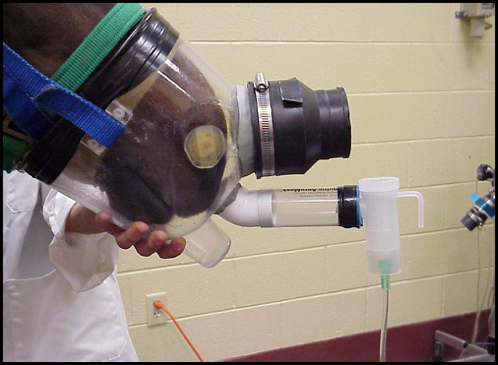 Although the measurements that we can get from these systems are more sensitive than the classical esophageal balloon and pneumotach method, they will not detect the subtle differences in airway caliber and reactivity, which can make a racehorse a tenth of a second slower or interfere with a jumper’s energy levels enough to make her take down a rail. To figure out if there are relatively subtle changes in the airways that can cause performance issues, we need to do histamine bronchoprovocation tests. Horses have very large airways, and small changes in very large airways are hard to detect with any form of lung function testing. If we challenge the airways by having the horse breathe in a small amount of histamine, which causes temporary bronchoconstriction, it is much easier for us to detect abnormalities. Why is this? Fluid dynamics, which also describe airflow through tubes like the bronchi and bronchioles in the respiratory tract, are governed by something called Poiseuille’s Law. This law states that the resistance through a tube is equal to the inverse of the radius to the 4th power. Think about this with an imaginary bronchiole that has a radius of 1.0 cm. One raised to the 4th power is still one. So, my resistance is 1.0 cm/H2O/l/s (read this as one centimeter of water per liter per second). Now, let’s imagine that this bronchiole is in a horse with IAD and I’ve just given that horse some histamine. The bronchiole has constricted and its radius is now 0.84 cm in diameter. If I raise 0.84 to the 4th power and then take the inverse of that, I suddenly have doubled my airway resistance. That’s a change that can really affect your horse’s ability to compete, and it’s the type of increase in resistance that we can see in real life.

Ready to Find Out More?